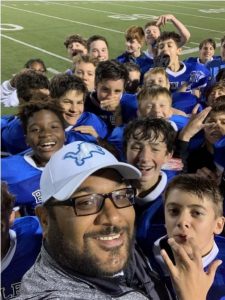 Shane decided to go into coaching after coaching youth in various Saturday morning rec leagues. When he was in college, he was a coach of a Junior High track squad and decided it was something he really enjoyed. This led him to work with the Bexley track and field team as an assistant.

Shane also coached football at Whitehall and understands how sports help with community pride. He decided he was going to give back to the community and help kids who were walking the same hallways and streets that he did growing up in Bexley. Being blessed to walk through Smith stadium as a player and now as a coach provides him a sense of great pride.

Growing up with great models in the form of wonderful parents, outstanding teachers and competitive coaches have helped him become an excellent community leader.

About the Author: Nate Riggs